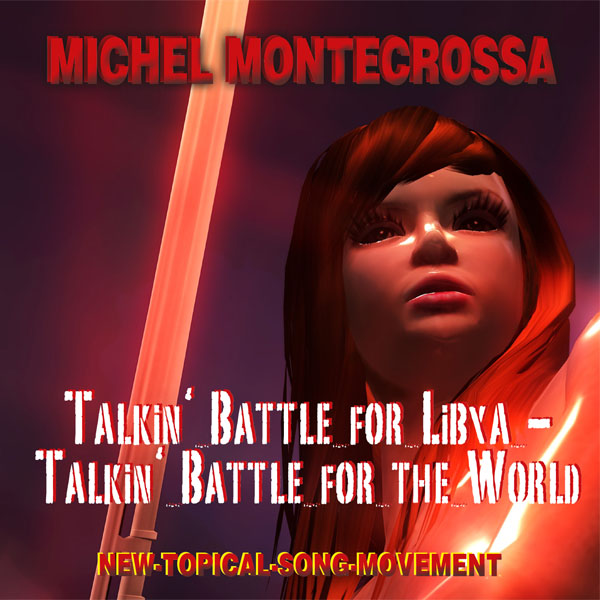 ‘Talkin‘ Battle for Libya – Talkin‘ Battle for the World’: released by Mira Sound Germany on Audio Single and DVD, is Michel Montecrossa’s New-Topical-Song about mercy, forgiveness and change based on compassion and goodwill.

TALKIN‘ BATTLE FOR LIBYA – TALKIN‘ BATTLE FOR THE WORLD
Talkin‘ Battle for Libya – Talkin‘ Battle for the World: / Victory for Libya means victory for the world / if it doesn’t mean bloodshed and cruel revenge, / if it will not bring conflicts of dirty power games.
Listen to me children of the future world, / learn from history not to repeat it again. / I sing today of the now that you think about / your today and now and keep tyrants out.
The battle for freedom is the battle of the world. / Wherever it is, it’s the battle of the young. / The young are made by love and for love they are born. / They shall bring love that makes all the world one.
Battle for Libya and for the World: / nations united bring peace to the earth. / The battle for Libya must bring end of sorrow / to be the sign of love for the world of tomorrow.
Victory of Libya must be a victory of mercy / and the end of things that are crazy. / Forgiveness, kindness and cooperation / are the victory needed for the whole world.
The world then will remember Libya’s rebellion / as a step and action on the upward path. / Future world of true intelligence demands / freedom of soul for the life of all.
Battle for Libya and for the world: / Each victory of love is good for the earth. / Each victory of love is good for us all. / Listen to me children of the bright coming dawn:
“Victory of rebellion / is a victory for the world / when changes come / without hate and pain.”
Lyrics & Music: Michel Montecrossa © Mira Sound Germany