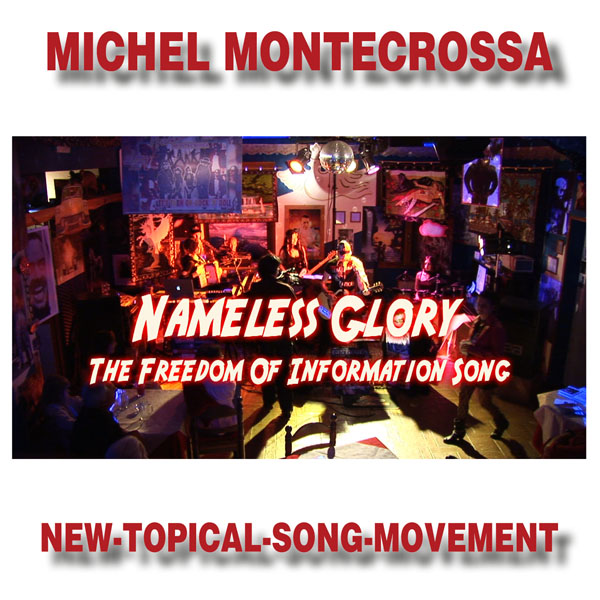 ‘Nameless Glory: The Freedom Of Information Song’ Michel Montecrossa’s New-Topical-Song-Movement Audio Single and DVD released by Mira Sound Germany is a song-prayer for all victims of tyrants in Syria and too many other places.

Michel Montecrossa says:
“Nameless Glory: The Freedom Of Information Song is a song-prayer for all victims of tyrants in Syria and too many other places.
These brave men gave their life for their strong belief in freedom and a better future. They indeed gave their life for all of us who always should take a stand for freedom and free information in our world.
In times of crisis and powerful change towards freedom there is heightened tension between belief and reality and each side is blocking access to free information from the other side.
But people neither want to lose their faith nor their sense for reality. They want to be free and for that they want free access to direct talking information from both sides, from the side of belief as much as from the side of reality. This access they will never get from tyrants.”

NAMELESS GLORY: THE FREEDOM OF INFORMATION SONG
But, really, god is too old a name. / “It is the nameless glory and there is / consciousness and bliss”, she said / and all reflections of her flame-born self / told of mighty hours in our room of change.
I said: “Nobody is a liar.” And I asked: / “is there anybody true?” She said: “Nobody is a liar. / If not so, please, do tell me the truth.” / As a wind wrestling through some leaves of autumn she came by. / There was no chance again to stay where all times stage their play.
What is it that made us think of man and golden tunes? / Is there something true or real to believe in? / In all this light there was no reason anymore to see anything like that. / And what we are we even were before time had a say.
They all seemed to be thinkin’ and seemed to be so precise. / They all seemed to be ugly and to be full of pride. / “No more lyin’, no more pain”,
was written in all the games of consciousness bold / and of doubts somewhere in creature’s cold.
And then it was a golden journey, / wider than all this universe. / It was time to plug into this starship again / and to take off from a world so strange
and to find the ocean and the aim.
Freedom of information is the open road / to the true self of humanity, / the power of human genius / and the destiny of human life.
Lyrics & Music: Michel Montecrossa, © Mira Sound Germany