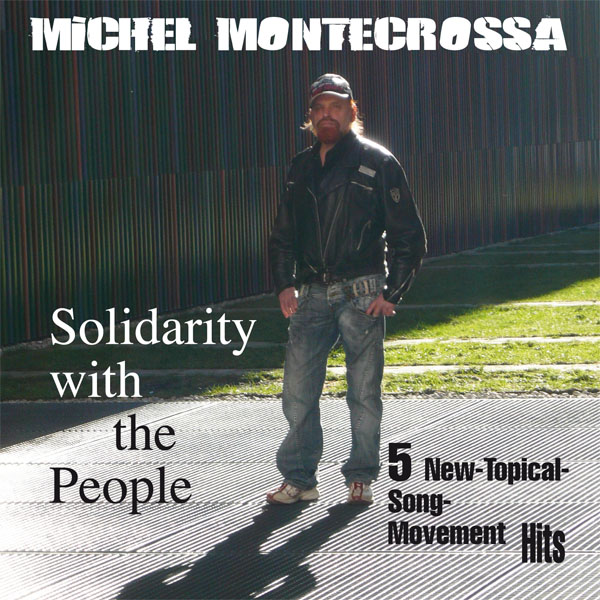 ‘Solidarity With The People’ Michel Montecrossa’s new-topical-song-movement maxi single released by Mira Sound Germany presents the thrilling solo acoustic performances of the 5 Hit songs ‘Solidarity‘, ‘I Have A Vision‘, ‘‘The Government Is Out!‘, ‘Ruby Gate 17‘ and ‘Tree On The Hill‘.

Michel Montecrossa says about the songs:

Solidarity
A folk-rockin’ song for the people and a world where we all vote, eat, work, talk, plan, think and love together so that your people will know my people and we don’t lose the peace and the world along with it.
This song is written as a gesture of solidarity with the people of Egypt and all people who fight and work for a better tomorrow.

SOLIDARITY
Come on, pretty baby, listen to me, / do you know what’s a-goin’ on? / Storm and thunder are on the road, / the world is a-goin’ wrong!
The people are frightened, life’s goin’ down the drain, / too many families know too much pain. / Come on, pretty baby, give me your embrace: / The world is goin’ insane!
I need solidarity and you need it too. / I need your love to make it through. / You don’t want to suffer, don’t want to be killed. / You want my lovin’, want to feel the place.
You know, pretty baby, waterboardin’ ain’t cool. / In the neighborhood there is electroshockin’ too / and fingerbreakin’ nowhere is taboo. / But nobody can stop the freedom move,
The call for the better, for the change of all. / Nobody can silence the people who are all. / The people are we and we want to be free. / Governments are thieves, but we defend the real.
Our solidarity is the clue, / the clue of love to make it through. / We don’t want to suffer, don’t want to be killed. / War is not lovin’, makes us ill.
Come on, pretty baby, listen to me, / I give you my kiss for the way of peace. / I give you my body, give you my soul, / Let’s live the life of heaven and nothin’ will go wrong.
The people will rise, no horror is endless. / We are here for the future, are the future indeed. / No more brainwashin’ slavery and poverty. / Let us fight and work for tomorrow free!
You need solidarity and I need it too. / You need my love to make it through. / I don’t want to suffer, don’t want to be killed. / I want your lovin’, want to feel the peace.

I Have A Vision
Is an intense bluesy song written with heartblood telling about the ideal of human unity manifested as the united states of planet earth. (U.S.E.)

The Government Is Out!
A Topical Hit Song calling for freedom and end of totalitarian regimes, liberation of human rights, end of fear, apathy and prejudices.
It says: Pay attention and listen to the young. They need good education in a truthful society to make their own way.

Tree On The Hill
Dedicated to the Unesco International Year of Forests. It is a strong reminder that we live through nature and can only survive with her.
It is an activist song by Michel Montecrossa who finances large scale afforestation in Mirapuri, the European Peace and futurist Eco-City in Italy. Mirapuri is a dynamic humanistic-spiritual community project founded by Michel Montecrossa.

The Songs (Click the song titles for the lyrics):
Buy from Mirapuri-Shop