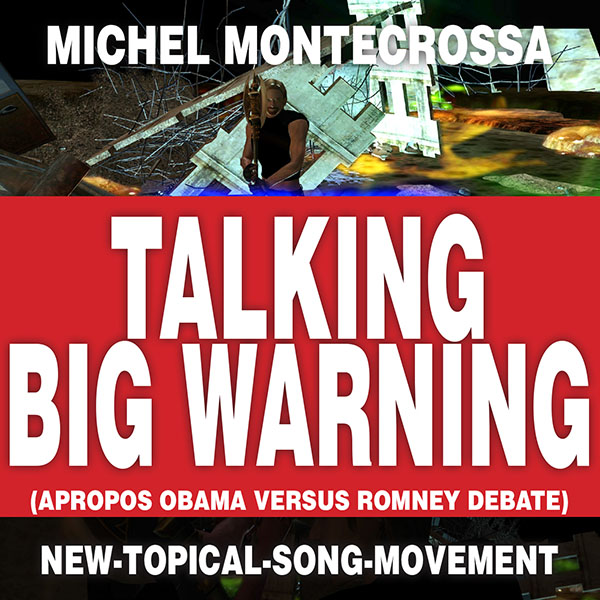 ‘Talking Big Warning’, released by Mira Sound Germany on Audio Single and DVD, is Michel Montecrossa’s New-Topical-Song about the fantasy level of the Obama versus Romney presidential debate and the actuality of the real world which clearly says: “The mode of consciousness must change. There’s no future for economy without World Unity and there’s no climate change without the United States of Planet Earth.”

Michel Montecrossa says about ‘Talking Big Warning’:
“I made the ‘Talking Big Warning’ song and movie at the time when Obama and Romney had their fantasy presidential debate about no economy solutions in a payola media centre to talk the people into something through non-communicative-discourse. At the same time outside this house the planetary reality world was ‘Talking Big Warning’ in the language of storms, hurricanes, tornadoes, heavy rain, drought, sweeping slavery, energy wars, suffering, poverty, unemployment, pain, earthquakes, tsunamis, volcanoes erupting and nuclear wars saying: The mode of consciousness must change. There’s no future for economy without World Unity and there’s no peace and climate change without the United States of Planet Earth.
And I say that it is in our hands, it’s our moment to listen to the Big Warning.”

TALKING BIG WARNING (Apropos Obama versus Romney debate)
What is our task and duty / in a world of battle and no pity? / In a world of crisis and conflicts? / In a world speaking the language of greed?
There’s big warning everywhere. / U.S.A. to Israel: “Get to the damn table!” / Merkel to the world: “Politics has failed.” / And we need food and some kind of housing.
Storms and hurricanes, tornadoes, heavy rain, / sweeping slavery, poverty and pain, / earthquakes, tsunamis, volcanoes erupting, / nuclear wars: It’s in our hands, / it’s our moment.
The operating mode of consciousness must change, / it’s like a new birth into a higher existence, / the lucky number in an apocalyptic world / of hunger and Endzeit outside the banka-elevators.
Lyrics & Music: Michel Montecrossa, © Mira Sound Germany