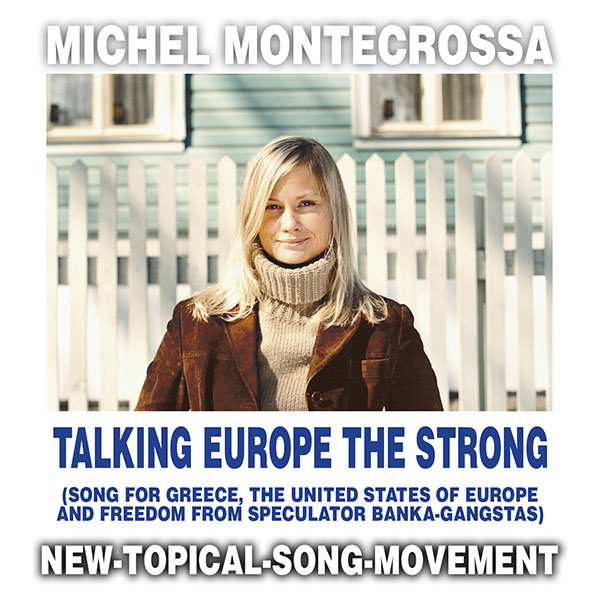 ‘Talking Europe The Strong‘ is Michel Montecrossa’s New-Topical-Song-Movement Audio Single and DVD, released by Mira Sound Germany, for Freedom from speculator banka-gangstas and the coming of the United States of Europe through a change of the banka-polito philosophy and a shift of power from banka-politos to the united movement of the people of Europe.

Michel Montecrossa about ‘Talking Europe The Strong’ (Song for Greece, The United States of Europe and Freedom from Speculator Banka-Gangstas):
“‘Talking Europe The Strong’ was written in Summer 2012 when European politos again gave billions of tax money to the banka-gangsta-speculator gangs, betraying the people of Europe by strangling their freedom of creative action.
The people of Europe more than ever must unite against corrupted banka-politos and their ruthless speculations that destroy entire nations. Greece is only the first example for this horrifying scenario, followed by Italy, Portugal, Spain and in fact the entire Euro Zone.
The European people now must unite in the love for Europe, in the love for the Union of Europe and must take a stand for the coming of the United States of Europe. The love of the people for Europe will bring young politicians of a higher ethical quality to the stage of action, and young power of progress will end the illusion of meltdown, which is only a trick of the rich and the banka-speculators to cheat the people into becoming cheap and mindless slaves.
Europe must not be in the hand of global banka criminality supported by money-power-sex-hungry politos. We all need a fundamental change of the world’s financial system, including full debt relief for all EU countries, controlled change from speculator banking to Real Value Banking, a stabilizing Euro reform that makes the Euro the currency of the United States of Europe – and all that must and can be followed by a fresh, unburdened start of the working hand free for future building.
My song ‘Talking Europe The Strong’ is a call to all people of Europe to use their intelligence, their humanity, their work-attitude and their liberal and effective spirit in an organized way for all people of Europe by bringing the people’s movement into the parliaments, into the media and into the law-making procedure. Then the United States of Europe will be the United States of the People of Europe and banka-gangstas and polito-corruptos will either have to change or to step aside.”