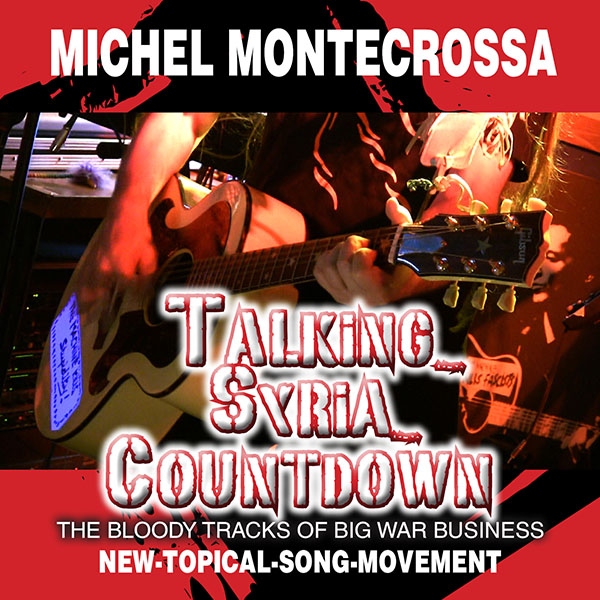 ‘Talking Syria Countdown’, released by Mira Sound Germany on Audio Single and DVD, is Michel Montecrossa’s New-Topical-Song about the bloody tracks of big war business for USA, Russia, Europe etc. and the Syria Support Group’s Brian Sayers, the former NATO official who is channeling money from Washington to Syrian Free Army and to the Syrian opposition chaos for extending the war within Syria and generating big war business for economy growth in weapons selling countries.

TALKING SYRIA COUNTDOWN
Syria’s unrelenting violence, torture and massacres / are the bloody tracks of big war business and trade of weapons. / And all the traders of weapons are prolonging / and expanding now the war. / Syria countdown is about how much longer / war-profit-slaughter can be extended.
In Russia, America, England, Germany and where not, / you‘ll find the big producers and dealers of weapons / having a good time. / “Booming weapons industry means employment and / money for the states,” they say. / “So let’s kill them all as long as it goes for the profit great.”
Talking Syria countdown is about politos and bankas / walking over dead bodies with no sense of humanity at all. / It’s about money, greed and no ethics, propaganda and bluffing us all. / Leaders and speculators work together, mislead the people, / don’t help them at all. / The rich help the rich, they don’t help the poor, / they create them. / Talking Syria countdown tells about cynicism / of leaders who are no statesmen. / Talking Syria countdown tells about warmongers / and human breakdown. / Talking Syria countdown tells about the people / that must rise.
Lyrics & Music: Michel Montecrossa © Mira Sound Germany