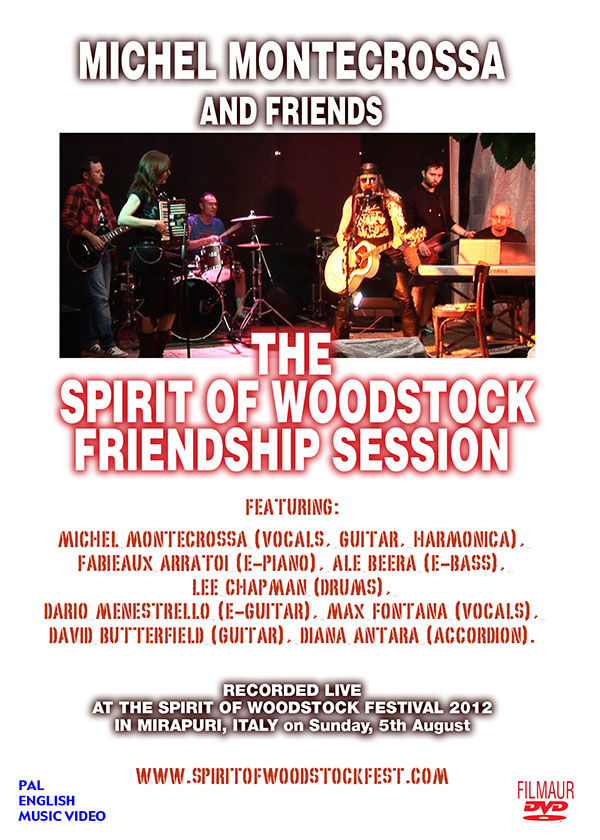 The ‘The Spirit of Woodstock Friendship Session’, released by Mira Sound Germany on Audio-CD and DVD, was recorded live during the concluding concert of the Spirit of Woodstock Festival on Sunday 5th August 2012 as a celebration of its 20th birthday.
It was a spontaneous coming together of festival musicians with Michel Montecrossa to take it easy without rehearsing and to just play for the joy and happiness of the audience as well as of the musicians.
The musicians: Michel Montecrossa (vocals, guitar, harmonica), Fabieaux Arratoi (E-piano), Ale Beera (E-bass), Lee Chapman (drums), Dario Menestrello (E-guitar), Max Fontana (vocals), David Butterfield (guitar), Diana Antara (accordion).

Michel Montecrossa says about ‘The Spirit of Woodstock Friendship Session’:
“The ‘Spirit of Woodstock Festival Friendship Session’ is a spontaneous coming together of festival musicians who asked me to play together with them on the final day of the Spirit of Woodstock Festival 2012 in Mirapuri.
I said ‘Yes’ and right away wrote three songs which I performed together with Fabieaux Arratoi, Ale Beera, Lee Chapman, Dario Menestrello, Max Fontana, David Butterfield and Diana Antara on the following day.
The titles of the three songs are ‘Don’t Cheat The Secrets Of The Green World’, ‘Talkin’ Reality – Talkin’ Consciousness Change’ and ‘She’s The Great Morning, The Wonderful Day’. After the performance of these three songs Max from Gitanes contributed the song ‘Staffette’. Then I added one more song with the title ‘Love And Unity Smile’ which we played twice for the joy of all.
Everybody immediately felt that something special was happening and that a legendary performance was taking place incarnating the living celebration of humanity through the easiness of music.”