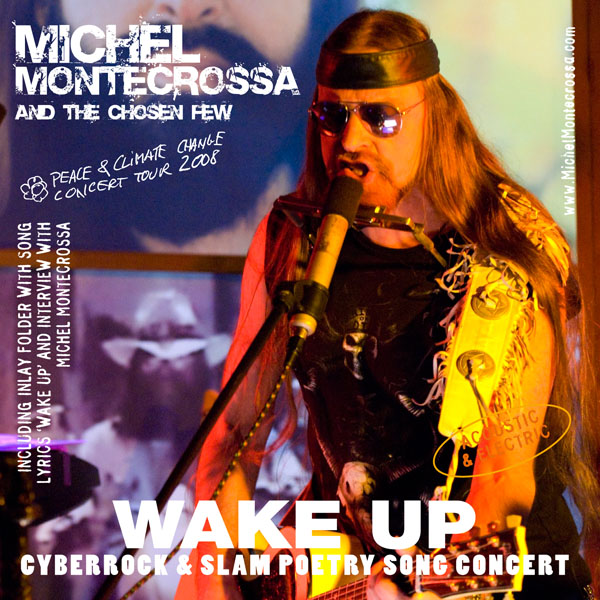 ‘Wake Up’ is Michel Montecrossa’s sixth hell-raiser cyberrock & slam poetry concert of his ‘Peace & Climate Change Concert Tour’ released by Mira Sound Germany on double Audio-CD and double DVD presenting 37 Michel Montecrossa power songs that open the ears. Included are great topical songs like ‘Wake Up’, ‘What A Time’, ‘Will You Wake Up?’, ‘Switch Off’, ‘Skull Fucker Rock’, ‘Get Rid Of All Your Answers’, ‘Free Room’ and ‘Wordless Image’.
Mirakali and Diana Antara contribute powerful songs like ‘Who You Are’ and ‘It’s Not The End’.

About ‘Wake Up’ Michel Montecrossa says:
“All over the world writing and singing bring us songs that make us aware in larger ways, songs that are broadsides of consciousness.
They are setting free the words so that they can fly with the vastness of rhythms and chants. Melodies give charm to meaning and voice the magic of living dreams that make us wake up.
With the coming of printing, radio, recording T.V. and internet, the songs of the street singers about hopes and revolutions, outlaws and saints, hard times and love flourish as never before as the thousands of broadside ballads composed, printed up, recorded, played and loaded up for listeners everywhere on this globe and in outer space. It began around the year 1500 to grow in an ever increasing way and has never stopped since then.
The british museum alone has no less than 12000 of them and nobody can tell the number of broadsides sung throughout the world. They all give to mankind the vision, the eye-opener, the wonderful feeling that makes you wake up.
My songs are broadside ballads for global cyberhighways as well as for the simple gathering.
They are the wake up cry for today and tomorrow.”

The Songs, Disc One: